Until the release of Bloodstained I don’t think I touched a single video game from the end of May to June 18th. All my free time was sucked out from working on some demo tracks for an audition.

Anyway, so I haven’t had a lot of time to play games, but you know what I do have a lot of time for? Listening to music because I have 8 hours a day at work and have Spotify playing for most of it. And you know what just got released on Spotify? Every single mainline Final Fantasy OST and then some.  So in the last couple weeks I went through and listened to every OST from I to IX to find my favorites in each game. I’m limiting this post to just those games mostly because those are the ones I know the best but also because until X, Uematsu was the sole composer for all the OSTs and I think he’s awesome. Favorites are hard to choose but I painstakingly did the best that I could.

I will also note that it’s made my last.fm stats pretty amusing to look at. 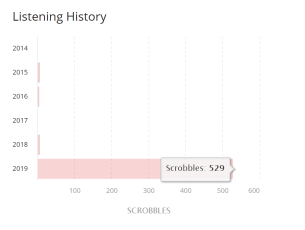 I’m just linking to the songs on Spotify because that’s where I have everything organized and also it’s an easy way to look through the entire OST, but these songs are pretty easy to find on Youtube and whatnot.

Final Fantasy I has a pretty simple soundtrack, indicative of its era. You’ll notice very quickly in this post than I’m just sort of guessing and rambling when writing about music, and especially for these 8-bit tracks. To me, this song has an adventurous feel to it, and almost a sort of mysterious and bright feeling as well. It sets the mood of the game pretty well. I also think the melody itself is pretty catchy.

That being said, I do like this song quite a bit. It has a bit of an ominous aura to it, as well as that mysterious and adventurous sound like in Chaos Shrine. I can’t say I know much about it’s context within the game itself, but this song makes the castle seem like an important and critical point of the journey.

Honorable mentions: Chocobo Theme for being the first rendition of the theme.

I think this is a really underrated song. It has this sort of spooky slow opening riff and then the drums suddenly kick in 0:50 and it becomes a blood pumping type final boss theme. I’ve noticed that song structure among quite a few Final Fantasy final boss themes, so I guess it also set that in place for the future games.

The DS remake’s remix of this song is also worth a listen.

Honorable mentions: Battle 1 ~ Fanfare, Battle 2. I’m linking to these because I think Final Fantasy III has some really catchy battle themes despite the technological restrictions and also because no one ever talks about them.

There’s going to be quite a number of final boss themes on this list, so get ready.

We’ve officially entered the post NES era of wonderful battle theme instrumentation. The bass line on this one isn’t too complicated or pronounced, but it carries the rest of the song very well. It has some interesting chords that make the battle feel epic and intense. It also has this cool sort of fanfare-esque trumpet instrument that’s used throughout a lot of other important tracks as well. I don’t think people mention this OST very often either when it comes to Final Fantasy, but I think this game sets the bar pretty high.

Of this entire list, I think Battle at the Big Bridge is my favorite song. It has a very pronounced and addictive bass line. The percussion feels chaotic and has these fast hi-hats scattered throughout the song. It’s really epic, but also has this playful feel to it, especially after the intro (at around 0:30, after the hi-hats), which fits Gilgamesh’s character so well. Final Fantasy V as a whole also feels more comedic and flamboyant than all the other post IV games, so that sort of lines up with Gilgamesh as well. It’s upbeat and just makes me excited about the battle.

If this were pop music I would call this song a “bop”.

I’m not entirely sure why I like Terra’s Theme so much but it’s always been my favorite song in this OST (note: I’ve just recruited Strago and Relm into my party and I’m standing right next to the airship ready to board, so I only have full context for songs up to that point).

Maybe it’s the relaxing nature of the song. Maybe it’s the melancholy feel. Maybe it’s the flute, and I love hearing flutes in songs. It does fit Terra pretty well, but since it plays across the entire overworld I don’t really associate this song with her anymore. Other songs with the same melody motif however do play specifically for Terra, so that’s pretty neat.

I felt a bit lame picking this song because I don’t think anyone really needs yet another person to talk about this song. But do like it a lot, so I’ll just leave it at that.

I’m excited to see how this is going to go down in the remake.

The Extreme starts off with that structure I mentioned for FFIII. I suggest listening to this song in stereo,  because the intro part with the wind sounds and “Fithos Lusec Wicos Vinosec” fly and swirl around from side to side. Then it goes into a slow somber piano part until the classic Final Fantasy battle baseline from the SNES games kicks in and then the song kicks off into an epic final boss theme. There’s a lot of cool string and brassy instrumentation and I like how the drums and instruments build on one another in layers of chaos.

Honorable mentions: The Man with the Machine Gun, Maybe I’m a Lion

Okay, I can’t really tell you why I like this song so much either. This is sort of an odd pick for a favorite song in a soundtrack as vast as FFIX. But this song is sort of ragtime-esque and feels very whimsical and playful. The melody and chords feel like they’re jumping around. Honestly, I almost want to associate this song with Kefka in FFVI because this song reminds me of Kefka’s theme, but it also fits Zorn and Thorn flamboyance and wackiness well too.

FFIX is the game here that I have the most nostalgia for, so listening to it’s soundtrack for the first time in a long time was quite amazing.

Honorable mentions: Festival of the Hunt, Daguerreo – the Hermit’s Library, Not Alone, Unforgettable Sorrow, Darkness of Eternity. This is a very biased and long list of mentions.