Kim from LaterLevels has a thing going on right now called #LoveYourBacklog Week and I thought it was pretty cool and my backlog needed some updating anyway so here’s my contribution!

A game you’re eager to play, but haven’t yet started

Metroid Fusion or Metroid Zero Mission. I shamefully only recently finished my first Metroid game so I’m curious to see how much I’ll enjoy the two GBA games. It seems like they offer some nice quality of life improvements. I actually played an hour or so of Metroid Fusion back in high school and surprisingly still remember how the opening sequence plays out – so I’m a bit more eager to try that one, but I’ll probably go in release order.

None of the above. I try not to do this anymore. Once, maybe. Several? That’s way too much time to spend.

The most recent addition to your library

I’ve actually been pretty good in the last year or so at only buying games I want to play “now” instead of “eventually”, but at some point I did pick up the Zero Escape games in a bundle when they were on sale on Steam.

The game which has spent the most time on your backlog

I mentioned this in my last backlog post but when I bought Bioshock Infinite for PS3 around a month or so after its release, it came with a free code for the original Bioshock. I was in high school at the time. Bioshock Infinite was released in early 2013.

This is actually a prompt from the 2019 post rather than the 2020 one, but I wanted to include this as an excuse to throw some graphs into this post. 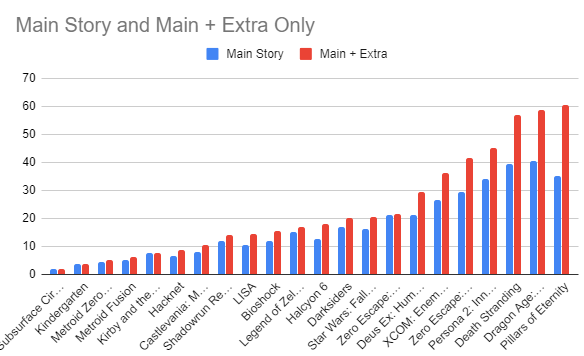 The person responsible for adding the most entries your backlog

My boyfriend – because eight of the games on the backlog are his. I shamelessly stole both Metroid GBA games from his childhood collection at his parent’s house.