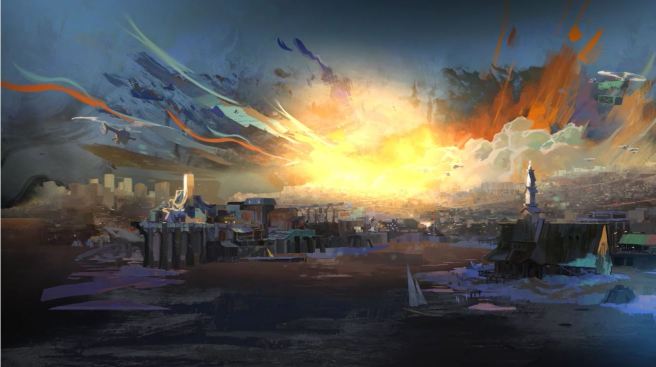 Of all the RPG video games I’ve played, Disco Elysium is the one that feels most like a paper and dice RPG.

Let’s back it up a bit. For the last month or two I kept hearing about a RPG called Disco Elysium. From what I gathered from the Steam description and comments on reddit, Disco Elysium is an isometric RPG in which you are trying to solve a murder mystery with a lot of  skill checks (a la Fallout New Vegas, one of my favorite games, but better – according to a bunch of strangers on the internet). The game also claimed to have zero combat, which definitely seemed odd and intriguing for a RPG. It seemed like it was something truly experimental and innovative.

And that’s all I knew about the game before playing it, because a bunch of strangers on the internet said to avoid any and all spoilers and to jump in completely blind. To be honest, I think that was pretty good advice, so I’ll be another stranger on the internet warning you that this post does not have any story spoilers, but I will be discussing the premise and gameplay in some depth (but you can skip to the end of this post to read about some RPGs I like).

Anyway, back to TTRPGs. When I say that this game feels like TTRPGs, I’m not referring to the more combat heavy systems like Dungeons and Dragons or Shadowrun. I’m sure there are many other games that feel very similar to those. Like maybe the actual DnD and Shadowrun video games.

Disco Elysium reminds me of the games where the “combat”, if any, could consist of a large narrative aspect and just one or two dice rolls. Also, these are the games where only the player makes dice rolls and the GM does not. I’m thinking along the lines of Apocalypse World (and other Powered by the Apocalypse games), and Blades in the Dark. I’m sure there’s others, but those are the only ones I’ve played. This is what makes this game so intriguing to me. 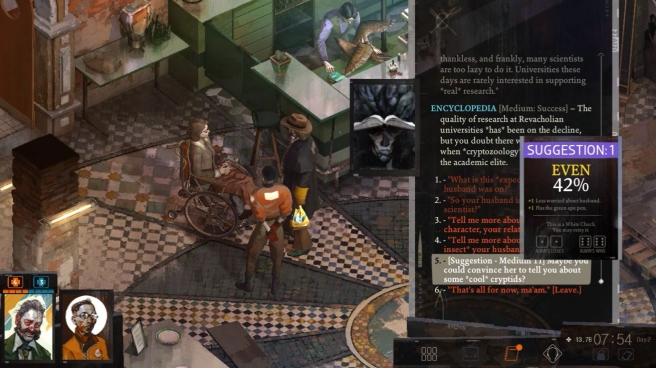 The core gameplay of this game mostly consists of talking to various people or examining different items or locations. The game revolves around these text boxes and options. There are dialogue options as seen above but also action options, e.g. “Kick the mailbox”. I saw someone complain about how this game is really just a visual novel that somehow convinced everyone that it was an RPG. I guess I can sort of see why they would think that? But as someone who really enjoys mystery visual novels, I don’t think that’s the case at all. Visual novel elements? Sure. But one of the biggest parts of Tabletop RPGs are stat blocks and skill checks and boy does Disco Elysium have a lot of them.

Like Apocalypse World, you roll two dice to make checks of varying difficulty. This roll is modified by your character stats and situational modifiers. For example, here in this conversation, I was able to get +1  from talking to her about her husband in a dialogue option before this one. Then I got another +1 for having a certain item in my inventory. There are negative modifiers too. If you agitate someone, they may be less likely to spill information (or more likely depending on the situation).

There’s also a lot of passive checks that just happen without you choosing an option. For example, I have a passive Encyclopedia check triggered in my screenshot above. Think passive checks in DnD. As far as I can tell, similarly to DnD, there’s no dice roll involved, but I could be completely wrong on that one.

There’s four different categories of stats. Your base stats (the column on the left) determine how many points you start with in each stat as well as how much you can level up that stat. You can also modify your points via equipment or consumables (e.g. drugs). The individual usage of each one is fairly abstract and also pretty amusing and unique. I can’t say that I usually see “Electrochemistry” in RPGs. (“Go to the party planet. Love and be loved by drugs”)

I really like Disco Elysium so far, but obviously I haven’t finished it yet (hence the title of this post). I’m about nine hours in, but I have no idea if that’s a lot or not. But as of right now, I’d recommend trying out this game if you’re interested.

However, I have played a lot of Blades in the Dark and can definitely recommend taking a glance at it or trying it out (if someone is willing to DM the game – that’s the hard part). The setting and atmosphere of the game is very similar to Dishonored and revolves somewhat discrete missions. By discrete I’m referring to the fact that the game has a “planning” phase and then the actual “score” that’s performed. A score is a certain job or heist or mission and etc. There’s a lot of interesting stuff in Blades in the Dark like factions and relationships with other factions, jail, stress and trauma, obtaining new turf, and etc.

It can pretty much be anything at that point. The Sprawl is a PBtA game that revolves around a cyberpunk setting. Monsterhearts is a PBtA game that revolves around supernatural high schoolers and romance. Anything goes. I specifically mention those two because they are the only non-Apocalypse World PBtA games I’ve actually been able to play so far. In writing this blog post, I found this awesome giant list of PBtA games. The possibilities are endless.

One thought on “First Impressions of Disco Elysium, and a Discussion of Tabletop RPGs”