My gaming group got a hold of an interesting little co-op game recently from our local game store (speaking of which, support your friendly local game stores!) called Flip Ships. I don’t know if any of us really knew what we were getting ourselves into. I’ve only played it three times so far, so I can’t say I’m very good at Flipping Ships yet, but this is my experience with the game thus far.

Unfortunately, I don’t have any gifs of this game to do it justice. I’d recommend this review for some proper flipping action.

This is a link to an image of the back of the box.

The goal of this game is to defeat the mothership and the attacking enemies before losing all your health from their attacks. You defeat enemies by flicking your ship tokens onto the cards themselves. If you manage to flick onto multiple enemies, then you attack all the enemies under your ship. There’s also enemies with shields that prevent your from hurting adjacent ships and ships that need two hits in a single round to kill. But the two main things to note on the enemy cards are the arrows on the left and the number on the right. The number corresponds to how much damage the enemy deals when it lands in the bottom most “stratosphere” zone, and the arrows denote how many zones forward it moves.

There’s a long board dictating zones and health (both mothership health and player health). The pink horizontal lines denote the different zones. So there are four enemy rows and the stratosphere. Every turn, the two furthest rows are repopulated up to five ships in each row. 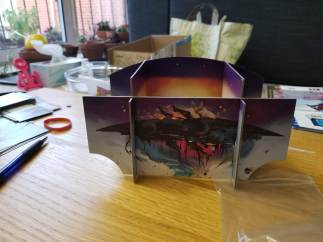 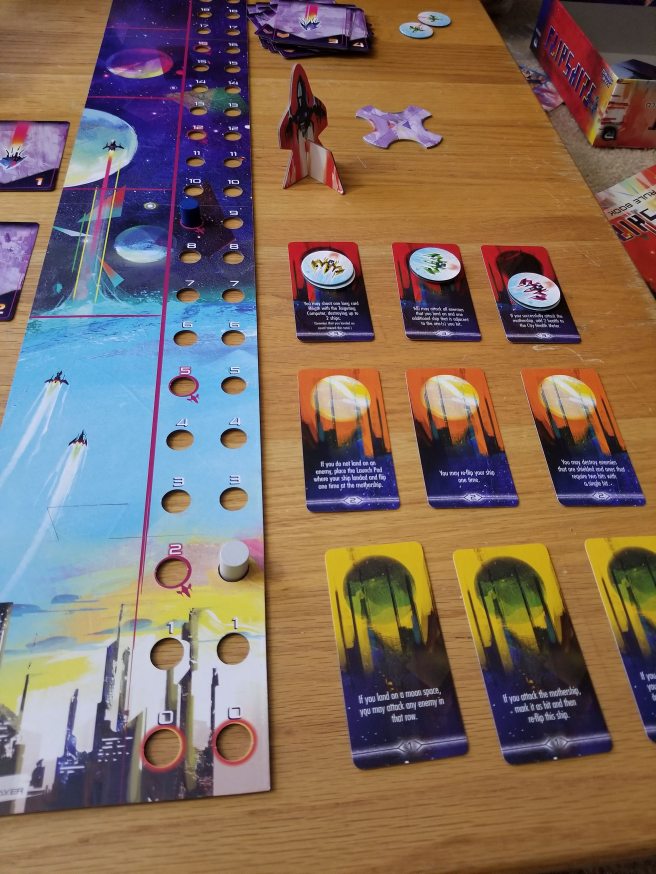 Luckily, as you start losing health points, you start gaining new ships and new abilities. These reinforcement unlocks are denoted on the zone board by the pink health rings with a ship on it. And the abilities are quite useful as well. There’s ones that let you reflip your ships, land on an empty space and kill an enemy within laser length (denoted by a small card), let you kill shielded enemies, and etc. The most useful one we found was an ability that let you attack the mothership from a closer distance.

The first game we played, we got hit with 18 damage in one go and went from 18 -> 0 health and lost. We didn’t get a single reinforcement and it was over in three(ish) rounds. I’m not sure if that’s a common issue of the game or if we just sucked and got really unlucky. Regardless it was sort of a shame to play an entire game without unlocking anything, especially on our first time playing. The next two tries went smoothly.

Honestly, this game is sort of ridiculous, but I think in a good way. In just three games, we’ve already lost a ship token from just flipping them all over the room. It’s exceedingly easy to over or under shoot every single flip and it definitely made us feel like little kids throwing game pieces around. With a good group of friends, this game can lead to a pretty amusing evening.

Follow Games (and Other Bits) // Musings and Thoughts on WordPress.com